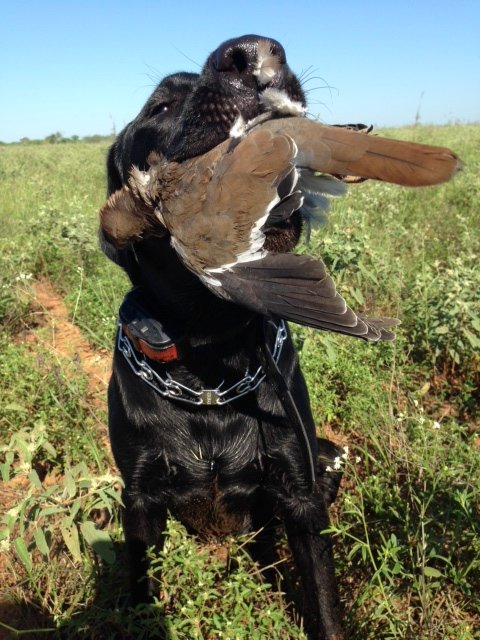 This article was sourced from Texas Dove Hunters’ Magazine

For Janie and me, it was the long awaited opening of the Texas, South Zone, dove season.  The North and Central zones having begun roughly three weeks earlier, had left us “chomping at the bit” to begin our season. Those of us south of a line from Orange to Del Rio had been like puppies in a pen anxiously waiting to be fed.

The Friday after the third Thursday of September, for South Texas wing shooters, is an event that rivals some domestic birthdays and anniversaries in importance.  Unlike solitary hunting on a deer stand, most dove hunts are as much a social occasion as they are the satisfaction of hitting a fast moving, jinking, feathered, fighter plane.

Every opening weekend, I’m fortunate enough to join a Houston friend and eight to ten of his good customers at the “Big Field”, from which we’ve grown to expect an occasional limit hunt.  Having hunted there with Rene’, our outfitter, for going on thirty-five years, it’s become a special place. During that time he and I have become good enough friends for his granddaughter to call me Grandpa Steve.

This part of Duval County is in the heart of the South Texas brush country. Always the pessimist, Rene’ had warned us not to expect the wave upon wave of eight to ten bird flights we sometimes see. Sure enough the first morning’s hunt, while we shot a few birds, was not spectacular. Regardless, a grand time was had by all.  Most of us downed three to four birds, while a few lucky guys in “the sweet spot” had close to ten.

Once the birds quit flying, we gathered up spent shells scattered around the huisache bush where we had hidden, and trudged back to the two-sided galvanized metal windbreak, we call camp. Even though our shooting appetites were not quite sated, all the hunters were happy and anxious to renew old acquaintances.  While re-hydrating with cold water, soft drinks, or heaven forbid, an adult beverage, everyone enjoyed snacks of jerky, dried deer sausage and rat trap cheese.  We all enjoyed the usual back and forth banter between hunters. One good natured hunter always reminds another of a missed “ice cream” shot.  Others make the usual excuses for their less than spectacular shooting skills.  It’s not how well we shoot, but how much fun we have.

The morning had been cool by late September South Texas standards.  But with the thermometer beginning in the mid-seventies, it’s pushing the high nineties by lunch time.  Any hunter fortunate enough to be owned (and they do own us) by a good retriever has to be especially careful not to let his dog over-do. Many an early season hunter, too anxious to shoot while not being alert to his dog’s well-being, has paid the price of having his dog permanently disabled or heaven forbid, losing it.  Retrievers love their job so much, that given their desire and drive,  …always giving it 150%… will push themselves to the point of dangerously over-heating.

Janie, my black dog, and I, carry a water jug and folding bowl as a precaution to getting into trouble.  If the warning signs of heat exhaustion become apparent, we just “fold our tent” so to speak, and wait to cool down.

At any rate, the lack of birds and the early morning coolness kept Janie from getting into trouble.  She had made some fine search and find retrieves in wet, thigh high grass.  And, when I let her, she helped some close-by hunters find a few difficult birds.  Mourning doves, being so well camouflaged are often difficult to see, even on bare ground, much less in the tall grass we were hunting.

She’s four now, and has finally gotten over breaking before release on a downed bird, or munching these tasty morsels on the way back.  In the off season we’ve been fortunate enough to earn a few Hunt Test ribbons.  We both enjoy the competition, but for us there’s nothing like live birds in the field.

Back in camp our group in busy cleaning the birds.   Even though the action is constant, this group honors its obligation to properly care for the game.   And in the field, always being good sportsmen, we take time to find a bird on the ground before shooting again.

Once the chores are done, everybody mounts up, forming the caravan to a nearby town for breakfast. It doesn’t matter whether they order burgers, huevos rancheros, chicken fried steak or the #18 “Gringo Special” Tex-Mex plate, we still call it breakfast.  South Texas small town cafes have really good chow that rivals four star cuisine in the big city.

Back in camp by mid-day Rene’ suggests that we try another field that gives us a chance to finish our limits on the afternoon hunt. There’s time to kill before the afternoon feeding flight, so some of our hunters, not having crossed paths since last season, spend their time catching up on each other’s lives.

Three o’clock finally rolls around, and we gather for the short drive to the new pasture.  None of us have ever hunted this field, but it looks like a great set-up. There’s close to a hundred acres of hay field surrounded with mesquite brush. Having been mowed in early summer, the vegetation is sparse except for occasional clumps of waist high volunteer Johnson-grass scattered here and there. It should be relatively easy to find birds on the ground. Yeah sure!  Our bonus though, is the groups of round bales.  These are excellent cover for concealing gunners from these spooky feathered targets.

After a little scouting, Janie and I pick a promising spot well away from the other hunters. In one hay-bale group, there’s a cave-like space open on one end between two bales giving the two of us a good place to hunker down. While totally concealing her, and with nothing showing but my head, I can scan the skies above the field in all directions without the birds detecting us before I take the shot.  Given this really good setup, our expectations of a high volume hunt are well founded.

It’s not long before the birds begin to arrive from their mid-day roost, anxious to feed in the field around us.  Thanks to our hide, I’m able to drop birds on a regular basis for a change. The moon and stars have aligned. But with the birds winging-in from all directions, Janie’s only able to mark the fall of a few.  More often than not, most of our birds tumble out of her sight. Had it not been for all the hours we’ve spent practicing blind retrieves, I’d have not have been able to heel this anxious athlete out of her den, and line her to the well camouflaged birds on bare ground or in weedy cover.  Even though trembling and nearly overcome with excitement, she somehow has learned to wait for my “Back” command.

Upon release, she streaks in the general direction and executes a short hunt when my whistle chirps softly letting her know she’s in the area of the bird.  Then after nosing out the bird, my partner proudly trots back to deliver our prize. With all the work, the near 100 degree heat soon starts to take its toll.  While she would never quit, her enthusiasm and pace have slowed considerably.  I’m careful to give her a drink after each retrieve and splash a bit of water on her face, head and ears.

This goes on for a while, but it’s been so fast and furious, that I lose track of how many birds we’ve bagged.  But the pleasant weight in my bird bag suggests I’d better take time off to count.

As I lay our birds on top of the hay bale,  Janie whines and looks at me, quizzically wondering why I don’t shoot (or shoot at) the birds continuing to streak within my 20’s range. Though noisy and anxious for more, she obediently stays in place.  “What a dog!”

Once the tally is complete, we realize that we need just one more to round out our limit.  Having started her first retrieves on a dead run, she’s now only briskly trotting after a downed bird, then slowly working her way back for the delivery.  I think to myself “We need to get this last bird in a hurry, before an already hot dog flames out”.

She’s to my left at the open end of our hide, when a threesome appears to my right heading straight at us.  I pick one, and raise my gun as they fly into range.  But that bird flares, so I switch to another.  As is unusual, I drop the little gray rocket, maybe thirty yards away, but once again out of Janie’s sight. One more time, she dutifully follows me out from between the bales. Then upon my release, she takes off, but only in a in a slow gallop.  When she reaches the area of the fall, she lets her nose do the work.

She winds it quickly.  But suddenly the wounded bird flushes in her face and flys away head high for her, barley above the Johnson grass.  With no regard for her heated state, she fires up and takes off on an adrenalin-driven dash, her muzzle within inches of the struggling bird.  This is not the hot, dead tired dog of the previous retrieve, but one with the drive and excitement of a two year old on its first retrieve, the first hunt of the season.

After sixty yards the bird falters and Janie nabs it in mid-air. On the return trip she morphs back into my fatigued partner of the previous retrieve.  I’m consumed with awe and wonder as I watch her poke along. It’s hard for me to understand how she could have summoned the energy and speed to catch that wounded bird.

Then and there, it strikes me how much I’m truly blessed by the Man upstairs, to hunt with this amazing creature.

Steve Sheaffer is a long time resident of Harbor Oaks. This is a story about Steve and his bird dog Janie that was published in Texas Dove Hunters magazine a little over a year ago.

Thank you Steve for the submission for our neighborhood blog! If you’d like to submit your own stories to the blog please send them to info@harboroaksrockport.com.