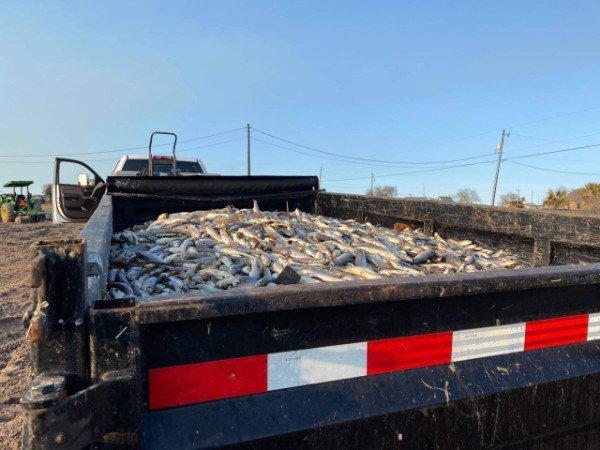 Tuesday March 2nd was the first day of the dead fish removal from the recent fish kill.  Crews removed more than 8000 lbs of dead fish on Tuesday alone.

Meanwhile Kris 6 News reported on the potential impacts to the local fish populations.

Dr. Larry McKinney, the Director of Gulf Strategies at the Harte Institute at Texas A&M Corpus Christi, said most of the fish affected were smaller bait fish. He said the effect from this event can trickle up the food chain, affecting animals that rely on those fish for food.

“A lot of things depend on them. It’s going to hurt a lot of birds, for example, the fish-eating birds later on, because they’re just not going to be there to eat, so that will affect them. Also, the trout and the red fish who eat those,” he said.

Dr. McKinney said local anglers shouldn’t notice too much of an impact on the amount of bait available, but game fish might bite more with the shortage of fish. He said restaurants who use local fish should also not notice a difference, because most of the fish served are deeper water fish, and most local restaurants get their fish from farms anyway. He did say that if birds become affected, local bird-watchers, and the economy that relies on bird-watching, could see an impact.

Since the area has not seen an event like this since the 1980’s, Dr. McKinney believes we won’t see many major drawbacks from this fish-kill event.

“There has been a hit, but I think they will come back quickly if we don’t have anything else that will bother them,” he said.

However, the Texas Parks & Wildlife Department is conducting research to determine what the long-term effects will be.

“As spring really comes on, and Parks and Wildlife will be doing their surveys, of both fish and birds, we’ll get a good idea by end of March of what the impact of this freeze was,” Dr. McKinney said.